What are the options for saving and preserving Flash content? 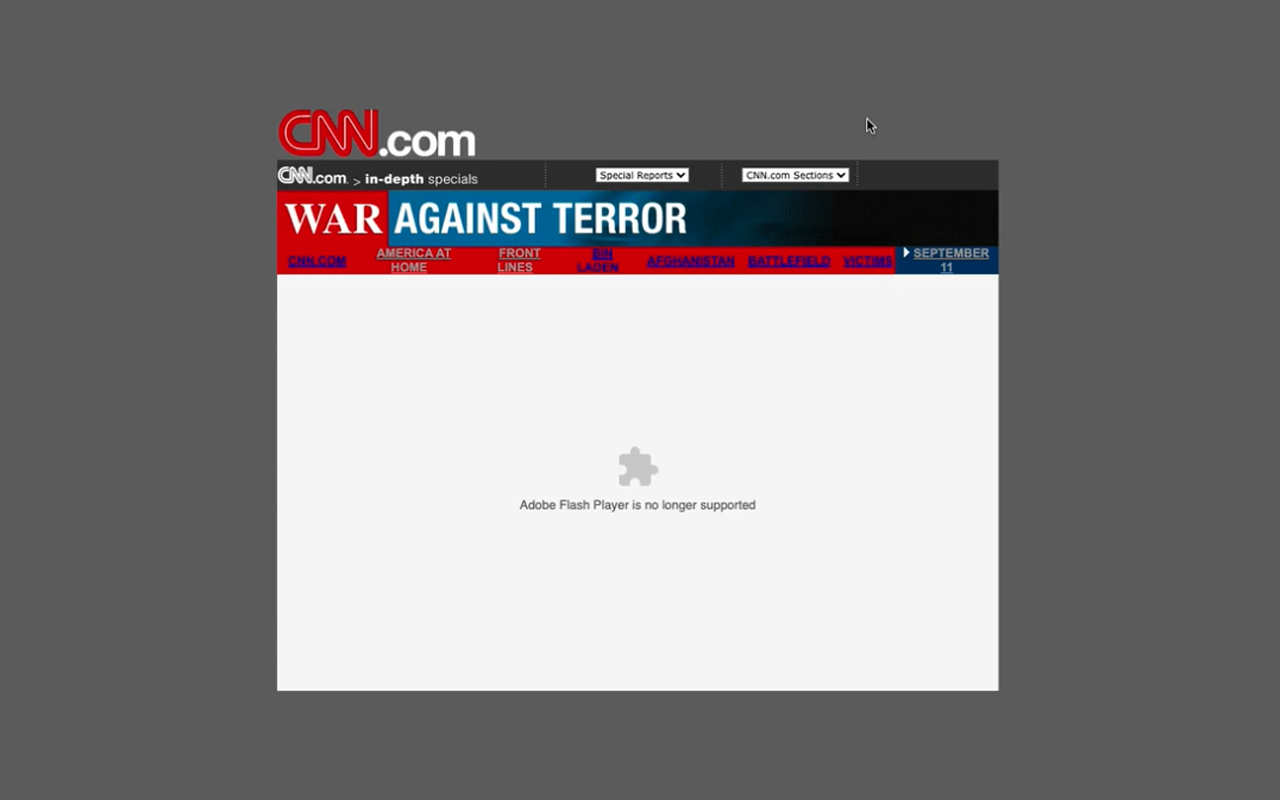 Recently we saw an article on CNN where it stated that one of the many downsides of the demise of the Adobe Flash Player is that “news coverage of the September 11th attacks and other major events from the early days of online journalism are no longer accessible.”

In the article they speak to Dan Pacheco, a professor of practice and chair of journalism innovation at Syracuse University’s Newhouse School, who states that “everything that’s not a piece of text or a flat picture is basically destined to rot and die when new methods of delivering the content replace it” and that “the internet is rotting at an even faster pace, ironically, because of innovation.”

Is it really the case that all publicly available rich media is destined to ‘rot and die’? Or like we have seen with projects that make a mission out of preserving obsolete content, are there options for the major website ‘archives’ to save and preserve Flash content?

The Current State of Flash

On the face of it, the future of Flash content is bleak. Support for the Adobe Flash Player officially ended on December 31, 2020, and content began to be blocked running altogether on the 12th January 2021. The impact of this has the potential to be huge, with the loss of over 20 years of Flash content. It’s not only the Online Journalism industry that has been affected, with Flash giving life to some of the internet’s most-beloved websites, cartoons, games and educational content.

Flash was able to rise to prominence thanks to its ease of use, and its compatibility with most browsers. From the point of view of creators, it was an early approach to no-code / low-code application development, which made it a great entry point to a wide variety of developers.

These characteristics made it not only popular with animators and video game creators, but also for Enterprises, which saw the opportunity to create complex applications at a low cost of development. Making use of frameworks such as Flex, Enterprises were able to create consumer-facing products that made use of Flash to deliver rich applications as part of websites.

However, as time went on, and security models evolved, the web moved on to HTML5 standards.

Despite the majority of websites designed with Flash being replaced with the new standards, there is a surprising amount of history and nostalgia still trapped within the Flash container.

So what are the options for the gatekeepers of this ‘archived’ content and how can they make it available for future generations?

In the CNN article, they mention Ruffle, an Open-Source Flash Player emulator written in Rust and maintained by the community. It is primarily focused on supporting video games and creative content and runs on all modern browsers through the use of WebAssembly. The downside is that it only has partial compatibility with AS3, the vast majority of ‘complex’ Flash applications, and has limited support for Flex/Spark, which means that for many Enterprises this would be an unusable or unreliable option.

The other option for hosts of ‘archived’ content is CheerpX, an Enterprise tool powered by WebAssembly and based on an emulated version of the Adobe Flash Player.

CheerpX for Flash is compatible with any Flash application, is fully static and served via HTTPS, and is completely self-hostable. By adding CheerpX for Flash to any existing Flash application, it makes it accessible to any standard modern browser, without a local Flash installation. This makes it uniquely suited to preserve accessibility to publicly accessible content, such as news archives.

By partnering with HARMAN International, the company now providing official enterprise distribution for the Adobe Flash Player, Leaning Technologies are able to enable public-facing websites to preserve the accessibility to legacy Flash content on any modern browser.

The CNN article ends by looking at the future of digital content, in particular content on social media sites, such as Tiktok/Instagram. They ask whether we will be going through the same problems again in the next 10-20 years when the next innovation comes along to replace it and if more should be done to preserve this content and others like it.

Here at Leaning Technologies, we agree more should be done to preserve accessibility to digital content. This is something we do on a daily basis with our products designed to improve the accessibility of content/applications written in Java, C++ and most recently Flash on modern browsers. So we welcome the challenge to preserve legacy content for future generations to come.