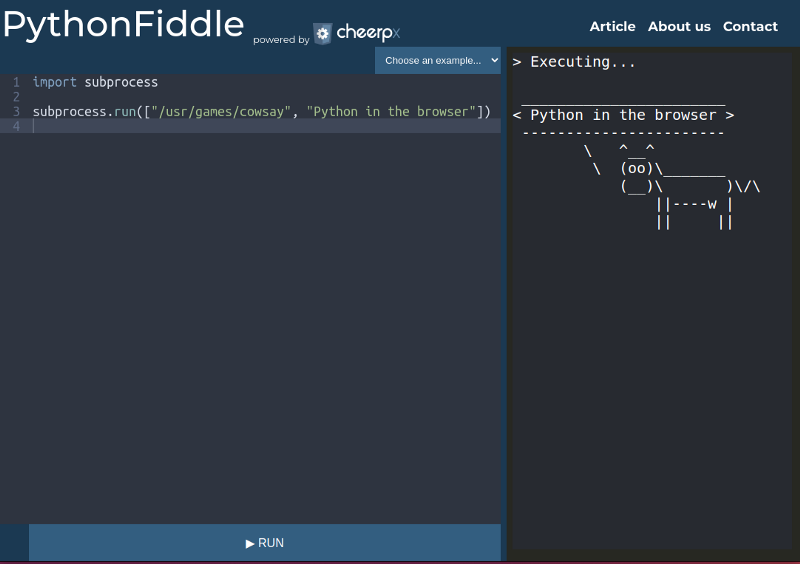 A recurrent need for anybody practising programming is running (and sharing) small snippets of code to quickly test an idea or ask for feedback. These kinds of Web applications are generally called ‘fiddles’, and there are plenty of them out there. The common use cases for fiddles are in education, but anyone can find themselves needing to use one to avoid having to set up a full native execution environment.

Most of these types of fiddles work by sending user code to a virtual machine that runs in the cloud. The program is then executed remotely and the result is sent back. Using a modern cloud environment has lots of advantages, in particular scalability and relatively low costs, but it does leave the developer open to a few issues:

An ideal alternative to cloud-based execution would be to take an existing language implementation and port it to the browser environment. The effort required will of course depend on the language ported and complexity of implementation, but it’s reasonable to expect it will be significant. On top of the effort put into the porting process, it will be easy to introduce brand new issues, and none of the work will automatically translate to supporting a new language.

Several years ago we released JavaFiddle, a client-side execution environment, that was able to address most of the problems mentioned above. It’s based on CheerpJ, our solution to compile and execute Java bytecode on the browser in WebAssembly and Javascript. Because of this, JavaFiddle is able to run Java applications sandboxed in the browser. This solution worked very well and the application gained quite some use.

Now we’re releasing PythonFiddle, a similar environment, that allows the user to play around with python. This time, however, it’s based on CheerpX, our WebAssembly based x86 virtual machine, that is able to run any program that is compiled to x86 assembly. This solution will allow us to bring a similar solution to many different language implementations, and much more.

CheerpX is a virtual machine that is able to run x86 executable programs in the browser. It’s based on WebAssembly, a new bytecode for the browser intended to be used as a compilation target for programming languages. CheerpX has a two tiered execution engine composed of an interpreter and a just-in-time compiler. The interpreter runs rarely executed assembly instructions and generates metadata for the JIT, which in turn can generate efficient Wasm modules for frequently run code.

Working directly with machine code has several advantages for CheerpX:

As an added bonus, CheerpX provides extensive support for file manipulation using a virtualized file system based on Ext2. The disk blocks are downloaded on demand from our CDN to minimize network usage. The blocks are themselves cached using IndexedDB to avoid redundant downloads on later visits. As the file system and all the changes made in it are stored in the browser’s local IndexedDB, none of this data will appear on our servers either, which makes this solution both extremely scalable and privacy preserving.

PythonFiddle is composed of a few components:

Being able to leverage the features mentioned above gives us a slew of advantages on this project:

Although we believe PythonFiddle (and the updated JavaFiddle) to be useful in themselves, CheerpX has the potential to be used in much more sophisticated applications. The possibilities are not limited to language implementations either, but any x86 code can run safely client-side. It’s a stable technology already exposed to the public via the many demos we’ve released over the past months. The most recent demo, WebVM, runs a full terminal session in a debian distribution in the browser. This shows just how complex the tasks CheerpX can achieve are.

Integrating CheerpX in web apps isn’t complicated either. The fiddle itself is just a thin layer on top of the CheerpX API. To run any program, you’ll only need to call the `CheerpX.run(…)` API call with the program, and CheerpX will take care of everything.

CheerpX is already incredibly versatile technology, but nevertheless, we’re continuously adding more functionality. Currently we’re implementing networking capabilities and support for running graphical applications. This would allow the creation of even more complex demos and applications. The possibilities are endless.

As CheerpX is so adaptable, there are certainly many use cases we have not thought of yet, and therefore we are looking for partners who will bring CheerpX to unexplored markets. If you have a fantastic idea that could be made into a reality using CheerpX, please get in touch: